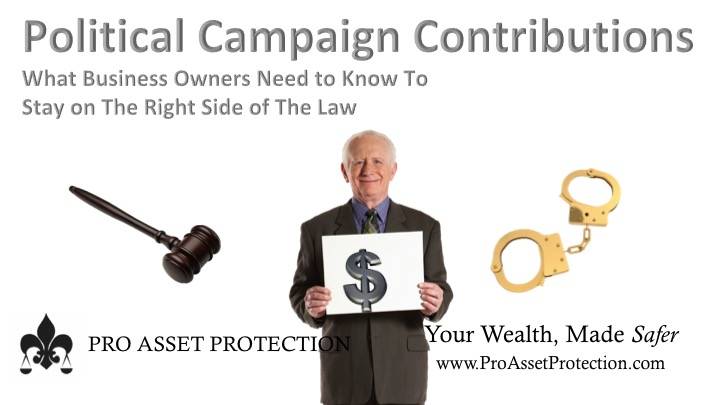 The corona virus crisis, its intersection with healthcare policy and how it has personally affected business owners and physicians across America has encouraged many  to be more politically active than ever before.

Here are the basic answers to some common legal questions about political donations.

Using these guidelines will help business leaders and professionals exercise their rights in a legally compliant way that will help avoid both legal exposure and negative media attention that can come with a prohibited contribution. As always, this summary is not specific legal advice that can account for your unique fact pattern and should be treated as resource for your own compliance and due diligence. Where available, these guidelines come directly from the Federal Election Commission (FEC) itself, the government agency that regulates and, at least theoretically, enforces election law including statutes controlling donations in all forms, including non-monetary contributions.

Who Can Make Political Contributions?

One baseline question is who can contribute, including individuals and certain specific business entities including some LLCs and Partnerships (but not your professional corporation, see details below), depending on how those entities are taxed. Individuals can contribute to candidates, parties and a variety of different political organizations to different amounts. Both minors and adults can give, but if you’re planning to give your minor children money specifically to make contributions that you are directing, that’s not allowed. It needs to be their own money and their choice.

The list of prohibited donors is long and detailed, for the purposes of our discussion and the interest of readers, here are some key details. Campaigns are prohibited from accepting contributions from certain types of organizations and individuals. These prohibited sources are:

· Corporations, including nonprofit corporations (although funds from a corporate separate segregated fund are permissible)

· Labor organizations (although funds from a separate segregated fund are permissible)

· Contributions in the name of another

Can I donate anonymously?

Probably not, at least not directly to a specific candidate and especially if you are donating over fifty dollars and using any form except cash according to the FEC.

Federal law requires disclosure of most significant contributions over $200 which includes donors’ names, addresses, occupations, and employer information, and that then becomes public record freely available and tracked by the Federal Election Commission (FEC). Many organizations report all contributions to stay on the safe side of the disclosure laws. Bustle did a great job in breaking down some of the details in an article on anonymous political donations last year.

Federal law requires that all political action committees (PACs), political parties, and federal candidates disclose any and all contributions that they receive that are over $200. This information, which includes donors’ names, addresses, occupations, and employer information, then becomes public record freely available — and easily searchable — via the Federal Election Commission (FEC).

How Much Can I Contribute?

Surprisingly to many, you are most limited in giving money to a specific candidate directly ($2,800) but can make very large contributions ($100K plus) to national party committee account and can give potentially millions away through other methods. The FEC has a very detailed chart that breaks down contribution limits based on both the type donor and the type of recipient. Cash (actually currency) contribution limits are most specifically limited by the FEC.

$100 limit on cash contributions A campaign may not accept more than $100 in cash from a particular source with respect to any campaign for nomination for election, or election to federal office.

What is a Contribution?

A contribution is anything of value given, loaned or advanced to influence a federal election. It can take many forms including the following specific examples provided by the FEC.

– Finds obtained through sales, fundraises and purchases of political items or event tickets

About the author: Asset Protection attorney Ike Devji has nearly 2o years experience protecting billions of dollar in personal wealth for successful American business owners, physicians and entrepreneurs from a variety of risks.