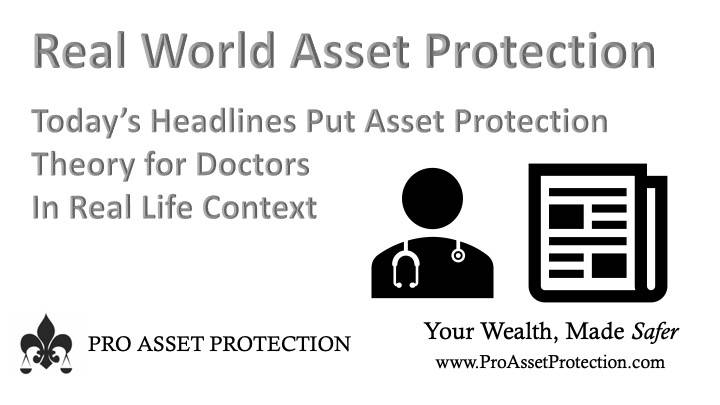 Those stories, like the others we will examine through the year, help illustrate the value of multi-layer defensive planning that includes compliance, all the right kinds of insurance and protective legal tools. They also show us that the scope of risk physicians face goes far beyond traditional “hands-on” medical malpractice and that asset protection for doctors can’t always be addressed by medical malpractice insurance alone.

Our last few discussions started an ongoing series on risk management that included a self-exam of the adequacy of your current core personal and business planning and then looked at specific risks that ranged from ID theft and prenuptial agreements to employment lawsuits and the dangers of owning your personal car through your medical practice.

Board Member Liability Outside the Office

I’ve previously covered the need for physicians and practice leaders to consider Directors and Officers insurance coverage or “D&O” coverage as it is commonly known. This D&O insurance covers managerial malpractice issues that aren’t covered by other policies including your medical malpractice and general liability policies and is also vital protection for your service on other boards including hospital, school, business and even homeowners’ associations (HOAs). All of these organizations should carry D&O insurance to protect their board members and it should be an expense that the organization bears, not you the board member.

As one upscale gated lakeside community in Gilbert, Arizona recently discovered, things can quickly get out of hand quickly when a (common) dispute about how board members were spending homeowners association (HOA) funds was aired on social media by home owners. The HOA responded by demanding retractions, imposing fines of $250 a day and threatening to impose a draconian “social media policy” on its residents that barred any unflattering comments about the board or the community. This all lead to threats of various suits and countersuits from all parties and both local and national media attention that, you guessed it, further portrayed all involved in a negative light.

Many physicians live in higher end communities with HOAs and should be aware that service on such boards carries significant personal liability for board members. If you serve on an HOA or any other board, some essential risk management is always the same; get a copy of the “in-force” (current) insurance policy to confirm its existence and limits and make sure you are willing and able to bear the risks of both an award and any costs of legal defense above the policy limits.

What if Your Employer Provided Medical Malpractice Insurance Disappeared?

Asset protection is a series of layers that include risk management, insurance, and legal tools. Insurance is a vital first line of defense against medical malpractice liability and the costs of defense which can easily be six figures on their own. As one group of nearly 1,000 Philadelphia area physicians recently found out, relying on a 3rd party to provide coverage as your only protection could leave you suddenly exposed. As the Wall Street Journal reported, the Hahnemann University Hospital was owned by one healthcare company (Tenet Healthcare) that provided malpractice that included tail insurance that protected its employed physicians from both current and past treatment claims.

The hospital was sold and the new owners (AAHS) replaced the coverage with lower priced care that excludes the tail coverage for any claims outside the policy period, before ultimately going bankrupt. This left the physicians both unemployed scrambling for new jobs and having to find and pay for their own tail coverage against past treatment liability at cost that some reports claim is up to $75,000 or face losing their licenses and financial ruin if they faced an uncovered claim.

The doctors and former medical residents estimate that … all together, they could be owed more than $20 million. Rates vary depending on medical specialty and other factors, but some of the … received quotes for the coverage ranging from $5,000 to $75,000. Many of these doctors are still in their post-graduate training or early on in their careers and carry substantial debt from medical school.

This all also left behind a large number of patients and area residents who now have hard feelings about how they were abandoned, which itself creates additional malpractice claim risk. At least one local medical malpractice law firm has an entire page devoted to potential claims against the hospital and its physicians including the historical details of the hospital outlined above.

Telemedicine, What Could Go Wrong?

Telemedicine has steadily grown in use and I regularly talk to doctors that are involved in it in various capacities including as investors, managers, and providers. All of those that deliver patient care this way have talked through their concerns with malpractice liability and how they felt the limited scope of their care, patient disclosure agreements, and their status as employed physicians protected them to some degree.

So far, their luck has largely held out and traditional medical malpractice claims against telemedicine have been low in both frequency and awards. That said, telemedicine is not without legal risk in other areas outlined in detail in a recent article in the National Law Review and as Judy Klein outlined in her recent article Physicians Practice article, Managing the Risks of Telemedicine. Headlines have provided other specific examples including a class action against one telemedicine company for privacy violations, several Medicaid insurance fraud lawsuits, and lawsuits involving both the sale of non-FDA approved diagnostic tests for various conditions and a lack of competent supervision over the prescribing and results of the tests.

Fertility medicine has some interesting unique risks, not the least of which is the accurate and safe storage of fragile and irreplaceable human embryos. A recent case from Ohio at a single facility has resulted in over 200 lawsuits resulting from the failure of a refrigeration system at a cryogenic storage facility in a fertility clinic that rendered 4,000 embryos and eggs of more than a staggering 900 families nonviable, according to recent news reports.

The damages that could be claimed by a family that has lost their only chance to conceive a biological child because of this failure could be devastating and the plaintiffs’ claims include both traditional medical malpractice claims and negligence, breach of contract, and intentional infliction of emotional distress claims that could implicate executive liability of the sort we have covered in previous discussions of the need for doctors to consider directors and officers insurance in the context of healthcare.

My friend, attorney Jay Adkisson is well known in both asset protection and creditor law circles. His recent article (that stems from a business dispute and lawsuits between physician business partners) on the use California Private Retirement Plans in Forbes should interest those outside California as well, as it is a stern reminder of some very basic asset protection rules.

First, timing is everything and any action you take as a reaction to a specific crisis will always be viewed in the harshest terms by courts, including up to the level of fraud. Second, actions you take that protect assets like exemption planning and the use of qualified plans, even if legal on their own, must still meet legitimate business purpose tests both to avoid being fraudulent for tax purposes and to provide the statutory protection many physicians seek. This test, outlined in the article, could apply to nearly any such plan:

To determine whether a plan was primarily or principally to be used for retirement purposes, a court is to look at the totality of the surrounding facts and circumstances, including five important but non-exclusive facts:

(1) The debtor’s own subjective intent in creating the plan;

(2) The timing of the plan in relation to other ongoing events (read: litigation against the debtor);

(3) The debtor’s ability to control and access the plan funds;

(4) Whether the plan complied in its design and use with applicable IRS rules, and

(5) Whether the debtor actually used the funds for retirement instead of for some other purpose.

Stay safe out there, there’s always more to come.

About the Author: Attorney Ike Devji, has practiced law exclusively in the areas of asset protection, risk management and wealth preservation for the last 17 years. He helps protect a national client base with more than $5 billion in personal assets, including several thousand physicians. He is a contributing author to multiple books for physicians and a frequent medical conference speaker and CME presenter. This article originally appeared in a different form at Physicians Practice, America’s Leading Practice Management Resource were Ike Devji has been a contributor for 9 years and has authored over two hundred articles.