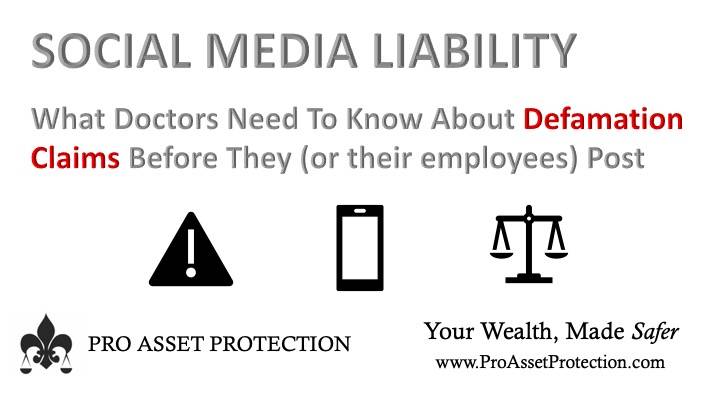 Doctors use of social media to promote themselves, their practices, side hustles and a variety of passions and social causes is at an all time high. Being online has its own laws and risks, including various defamation related liabilities. Here are some legal basics all Physicians (a.k.a. #SoMeDocs) need to know before they post.

Where is The Risk?

All social media including Twitter, Facebook, LinkedIn, Instagram, blogs, podcasts, video clips, and anything else you can think of that can be distributed to third parties as well verbal statements you make to third parties.

Step One: Know What Defamation Is

The term “defamation” is thrown around loosely in the media and popular usage for any negative statement one person makes about another, but it actually has a very specific legal definition. Knowing the specific elements of a defamation claim will help you avoid making such statements and the legal liability associated with them, including for statements made by your employees. It can also help you understand if you have actually been defamed or not and if you need to take legal action to protect your own reputation or the reputation of your business. Remember that a business, incorporated not, or another form of association including trade associations and unions may also have standing to sue.

There are two primary form of defamation including “libel” which is written (or posted, etc.)  and “slander”, which is communicated verbally. Both can have very serious liability both in the form of an actual lawsuit award and the damages suffered by the defamed party and in terms of the associated cost of legal defense, which can easily be six figures on its own.

For a negative statement to actually rise to the level of the tort of defamation, the courts will be looking for the following fact pattern:

Note that “opinions”, including aggressively negative ones the subject may find offensive, harmful or untrue, that are not based on a question of provable fact often don’t rise to the level of actual defamation. There is also some additional leeway for statements about “public figures” that have made affirmative efforts to put themselves before the public including celebrities, influencers, spokespeople, politicians and business leaders.  The following examples help illustrate.

You May Need to Call Your Lawyer:

Safe Harbors and Defenses to Defamation:

The Media Law Resource Center (MLRC) is a national organization that provides guidance on legal issues to media content providers and their defense attorneys, insurers and other associated professionals. This is their succinct summary of both affirmative defenses and some of the safe harbors where you may be able to speak freely.

While on many of these issues the burden of proof is on the plaintiff, the primary defenses to a defamation claim are that the statements are true, are not statements of fact, or are privileged. Some defamatory statements may be protected by privilege, meaning that in certain circumstances the interest in communicating a statement outweighs the interest in protecting reputation. For example, most, if not all, jurisdictions recognize a privilege for fair reports of what is said, done, or published out of government and judicial proceedings, and for reports of misconduct to the proper authorities or to those who share a common interest (such as within a family or an association).

Beware of Your Extended Liability

We’ve covered the legal definition of defamation, provided examples of defamatory statements and explained the main defenses to a defamation claim. Knowing those basics can help you avoid making those mistakes yourself, but both the practice’s liability and your liability as a practice owner or executive may extend beyond your own actions to the actions of your employees and subordinates as well.

Vicarious liability for the statements of your employees arises if they are made within the scope of their employment and this liability may include not only their own statements but their repeating or rebroadcast the defamatory statements of others, like a “retweet” or a post share. This liability extends to all forms of social media including 3rd party review cites and to actions involving the use of false personas and/or creating fake or defamatory negative reviews on sites like Yelp and etc.

There’s Also Internal Risk,  Be Careful What  You Say About Your Own People

Your practice also has a potential internal exposure to its own employees if it makes statements about an employee, their performance, their termination or “over-discloses” on an employment refence call.  Make sure owners and managers are aware of the very limited amount of employment related information they can disclose and have a specific info set that they limit their comments to. Managing all these risks requires multiple layers, including controls to avoid the risk in the first place.

Your employees can’t legally be banned from social media usage, they have a right to certain forms of speech related to their employment that’s well established in labor law. As such, you should have a formal social media policy that includes specific guidelines and authorities for all material posted in any of the practice’s official social media accounts like Twitter, Facebook, Snapchat and Instagram. As always, the policy is worth only the actual training, monitoring and enforcement that’s put behind it, merely adding it to your written employment manual isn’t enough (although you certainly should) and you need to devote some time and effort to cover the basics with your employees.

It should also provide all employees and owners clear guidance and reasonable prohibitions on what they should omit regarding their employment on their own personal social media accounts and the liability it creates with both defamation and HIPAA related clams. As attorney Michael Sacopoulos explained in his article for Physicians Practice, there are reasonable limits you can enforce:

Employees who discuss salaries and working hours online are engaging in protected speech, while a lone wolf who constantly belittles co-workers with malicious, derogatory remarks can and should be subjected to appropriate disciplinary measures. Such measures also apply to employees who use social media to intentionally post PHI, masquerade as someone else, proffer unqualified medical opinions, engage in racist or abusive language, or threaten others.

Michael’s  follow-up article provides specific details on what a medical practice social media policy should include and how it should be implemented. It’s a great starting point if you don’t have a social media policy and a good review and checklist to compare your own policy to if you do.

2. Are you adequately Insured?

I always advise that medical practices work with experienced, multi-line commercial insurance brokers that can help provide adequate coverage in terms of both the scope of the coverage and the dollar limits involved. There are at least 4 overlapping forms of insurance that may help protect you in the event of a practice related defamation claim.

Don’t count on low-limit “riders” on your medical malpractice policy that often also share limits with the base med-mal policy itself.  You should have coverage limits  that are adequate to cover both the worst case result (a lawsuit judgment) and the defense of a defamation claim; defense costs alone can easily be six figures.