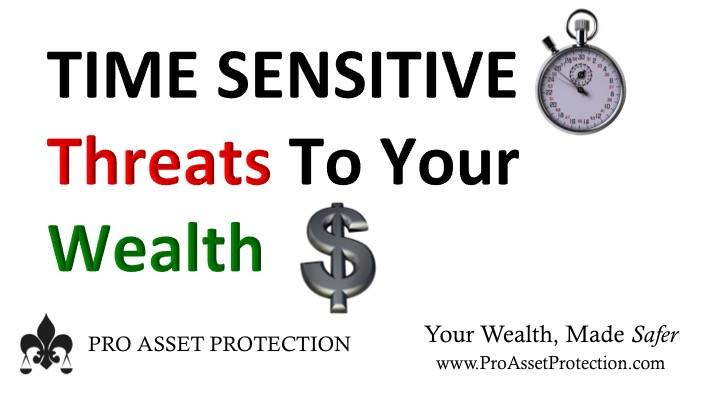 Asset Protection for doctors includes financial due diligence and risk management in many forms that go far beyond just medical malpractice. Be aware of these risks as tax season starts in your role as both a physician and a business owner.

The I.R.S. issues annual guidance on the 12 most prevalent tax fraud issues they will be looking for, commonly referred to as the “Dirty Dozen List”. The last update to that list was January 12, 2018 and the list remains unchanged from the 2017 Dirty Dozen list that I previously summarized and broke down into two distinct groups of threats. The first group includes serval variations of identity theft and tax return fraud that make you the victim in different ways. The second group lists common moves that make you the perpetrator of the fraud against the I.R.S. by engaging in practices like failing to disclose offshore accounts, using tax shelters, fling padded returns and using ridiculous and criminal “sovereign citizen” type arguments to not pay taxes among others. I highly recommend all our readers review that summary to avoid all these exposures.

One specific form of “tax shelter abuse” on the Dirty Dozen includes the abuse of captive insurance companies (captives) as tax shelters. I previously explained the emerging exposures physician captive owners face from their own captive managers and the promoters they bought the captive from as the I.R.S. continues to aggressively audit and prosecute those that fail business legitimacy standards. Tread carefully in this area and consider a third party review immediately if you already own one that hasn’t been audited yet.

Now that you should have all your bank, credit card statements for the 2017 holiday season back, review them carefully for any unauthorized charges, transfers or withdrawals. The holidays are a perfect time for scammers of different types to use cards to make unauthorized purchases that get easily overlooked in the higher spending volume typical to most Americans. You should also pull your credit report and review it carefully, many new scam credit accounts are opened in other people’s names during the holiday season as promotions, often under time pressure and with insufficient security. These accounts include credit cards, store charge accounts and even secured and unsecured personal loans. Time is of the essence, there are some time limits to making claims and every day that passes will make any corrective action required more time consuming and difficult.

There is no such thing as “secret’ in real life and any plan you can’t disclose under oath or that depends on you committing perjury will typically lead to ruin. This is especially true of bankruptcy, which has very specific rules against hiding or failing to disclose assets, including those you wrongly think are protected because you transferred them to a relative in the legal equivalent of psychic surgery. This lesson was recently learned the hard way by a Colorado spine surgeon who was arrested after being indicted of multiple criminal charges including bankruptcy fraud, fraudulent transfer and money laundering.

According to a December 8, 2017 report in the Denver Post, Dr. Cathleen Van Buskirk allegedly conspired against her bankruptcy creditors by failing to disclose assets, concealed others including coins gold and foreign currency and transferred other assets to relatives. According to the report, the claimed conspiracy also included making payments on fake invoices to shell companies relatives owned for her, which may likely have compounded tax fraud, invoice fraud and money laundering charges. Had she merely relied on protection of bankruptcy and the legal process, her life would have continued, although at a temporarily reduced lifestyle, and she would have been able to easily replace the few hundred thousand dollars in assets in just a few years given her age and specialty. Now she faces a criminal record, professional ruin and what will easily be several hundred thousand dollars in additional, avoidable legal fees.