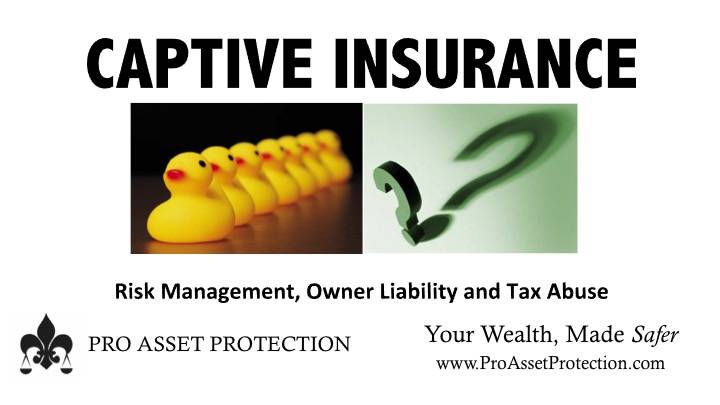 Captive insurance companies owned by small businesses and doctors are often thinly disguised abusive tax shelters. Their owners and their promoters are currently being harshly examined by the I.R.S. and knowing what to ask, what do and what not to sign will be vital to the financial futures of all involved and can put you into conflict with the folks that sold it to you.

Over the last few years we have had many discussions on this issue including both a multi-part look at the details of good captives for the few doctors and business owners that are actually qualified and in multiple warnings about year-end tax planning sales that may be tax fraud. As serious as the consequences of abusing this tool are, additional, time sensitive threats are emerging and may require you to seek experienced legal counsel.

Many American captive owners continue to themselves involved in onerous and expensive audits because the “promoter” (the individual or company that sold them) came to the attention of the I.R.S. because of some kind of perceived red flag. In some cases this first “bad apple” leads them back to the rest of that promoter’s client base, causing them to audit every other client that promoter has ever sold a captive to. This exposes the captive owners, including many doctors, to expensive legal defense costs on top of huge surprise tax bills that included the back taxes they owed on any part of the millions of dollars in premiums they paid that were disallowed as deductible expenses, plus penalties and interest.

In some cases, like the Avrahami case out of Arizona that has been widely reported on as an emerging model of captive abuse, the government also imposed a 20% “accuracy penalty”. In that case, a combination of questionable moves caused the authorities to find that the captive was not managing real risks and complying with the substance of the law. Based both on the issues predictably confirmed in the Avrahami case and previous case law and on the continuing guidance of captive experts I work with like attorney Jay Adkisson, these are some of the key issues I look at when examining this issue for clients.

Common red flag patterns to look for in your captive include:

– Overt promotion of the captive primarily as a tax shelter, including in the sales materials of the people selling them and even the correspondence between the buyer and the seller;

– A lack of real risks being insured and the insurance of risks that are highly unlikely to occur;

– A lack of compliance with tax law and other rules and conditions imposed by the jurisdiction;

– Paying premiums that are unreasonably high for the risks being covered;

– Structural issues designed to provide the captive owner an early return of premium in violation of tax law by allowing large sham “loans” of the premium back to the owner, up to 80% in some cases

What If This Sounds Like I’m Talking About You?

According to a recent scholarly article by insurance law expert John Michael Johnston, who litigates and consults on these cases nationally, the issues on the list above and presented by Avrahami are not unique. Johnston feels that physician captive owners, (including 831 (b) captives) will continue to face audits and will require immediate representation with both the tax authorities and increasingly, against their own captive promoters.

I believe that there are potential tax problems for many current captive insurance participants in view of the Avrahami ruling. I feel that there are a number of other captive insurance programs which have many of the same weaknesses and flaws as did the one in Avrahami. Unfortunately, I have also learned that having a large potential tax liability is not the end of the story.

Johnston warns that if your captive manager sends you a “Material Advisor Disclosure Statement” (Treasury Department form 8918) they have disclosed your captive to the IRS as one they provided “material aid, assistance or advice regarding organizing, managing, promoting, selling, implementing, insuring, or carrying out any reportable transaction”. This is where complex new conflicts are emerging between owners and promoters and what we will review in our next discussion.